Seminar in the Chamber of Deputies 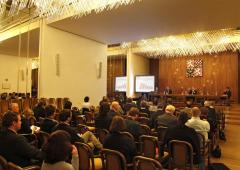 A total of 75 participants.

The main theme of the joint meeting was to support the preservation of the heritage fund our country and in particular the need to ensure financing for our monuments and historical sites.

held under the auspices of the Deputy Chamber of Deputies Petra Gazdík on The effectiveness of state resources invested in the restoration of monuments.

Towns and villages states that there is a high efficiency of government subsidies in the restoration of monuments.

- Cities and towns require an increase to Program MPR regeneration and MPS and other programs under the Ministry of Culture and It will thereby promote employment as well as promote the growth of GDP. One CZK grants in the restoration of monuments is reflected in the increase in GDP of approximately CZK 2.5.

All participants was greeted by Vice Chamber of Deputies of the Czech Republic Petr P Gazdík. In his speech he mentioned how the importance of restoring our cultural heritage and economic benefits, especially in the field of tourism.

The chairman of the Association - Mrs. Ing. Ivan Popelová (Deputy Mayor of České Budějovice) to home briefly introduces the activities of the Association and grant title Program regeneration of urban conservation areas and zones - a program that for 22 years allows cities to draw funds for the rehabilitation of their historic cores. Mrs. Popelová clearly demonstrates how finance were used meaningfully , How in the last 15th years were falling, and how cities are prepared to co-finance this program (continuous, multi-source, incentive). In 2014, is in the program CZK 140 million, cities need to have every year more than 1 billion CZK and therefore appeal to increase the amount to the Programme to about 400 to 500 million CZK.

Mr. Mgr. Jiří Vajčner Ph.D. (Director of the Ministry of Culture, Monument Care) built his speach on previous speech of Chairwoman of the Association and he presented all the subsidy programs of the Ministry of Culture and he supported effort the Association to increase the financial resources not only for regeneration in programs, but for all subsidies.

Mr. Ing. Martin Malý (Mayor Prachatice) presented a concrete example of efforts to rebuild their city - said specific amount of money that the city receives from grants and how much the city to invested annually  from its own budget (5-6%). He highlighted the existence of the program of regeneration and thanked all the founders and authors.

Mr. Ing. Stanislav Mrvka (Mayor of Town) joined in with his performance after the speech by previous speaker and presented the financing regeneration of their beautiful city.

Mr. Ing. Pavel Cizek (Mayor Spalené Poříčí) presented an interesting analysis of the economic impact of urban regeneration in the state budget. Clearly demonstrated that every czk from the state budget which is inserted into the regeneration and restoration of the heritage fund in the region, will bring the form of VAT and payrolls, one czk to the national budget.

Mr. Ing. Petr Locksmith (economist, former member of NERV) followed up on his previous speakers, thanked them for the important work they perform in their cities, and in his speech confirmed that investment in reconstruction is a very meaningful and economically, brings to the state budget one of the largest income spent on the one crown, because it is primarily human labor and has a positive impact on the economy of the region

We want to look for a way to preserve cultural heritage and legacy of our ancestors so that we can boast of the title European cultural country.

Some of the presentation

The importance of cultural heritage:

• the economic revival of historical cities, the development of services and other activities to service in CR bound

• relation to their town, to your neighborhood, to your Republic

Importance of the regeneration of MPR and MPZ:

• the possibility of recovery planning process in the longer term

• multiple sources of funding - one of the priorities of local policy, activation and motivation for conceptual and coordinated care about cultural values ​​in social and economic development of the territory

BENEFITS OF SUBSIDY regeneration program in the SPALENÉ POŘÍČÍ

CONTRIBUTION TO THE STATE